I was an active breeder of dachshunds during 1972-1980. Betweeen 1980 and 2006 I was "just" an ordinary dog owner but my husband encouraged me to start all over again and now he is just as involved in breeding, dog shows and blood tracking as I am.

My sister and I got our first dog, a German Shepherd, Curtings Quelleque Fleur (INT NORDUCH Ockels Iraq x SUCH Dolltorps Esta) because we would move to Malmö from Uppsala without protests. This was 1960. It was not entirely popular to leave friends and move to a big city but "Ketty," as we called her, became the gateway to an active life with dogs for both of us.

Then followed 10 years of exhibition and training and a growing interest for breeding. Through a friend I got 1970 my first contact with wire-haired dachshunds and kennel Björnslund. The same year I bought Björnslunds Dino, he was a tough and lovely guy and after a first prize in youth class and second prize in youth competition I was "fixed"! My interest in dachshunds resulted in one collaboration with Rolf Gyllin, Björnslunds kennel, who became my mentor and inspirer.

In 1972 I bought Björnslund's Randi that became foundation bitch on the standard size. She was a lovely bitch with personality and sharpness. She got first prize in open class and ck as a veteran for Ulf Kalling. In 1977, Björnslund's Ilja II was added to Engstorp. A wonderful brindle miniature with, among others, BIS at SKTK's exhibition in Halmstad 1978 and BOB, CAC, CACIB and BIG-2 SKK Malmö 1978. 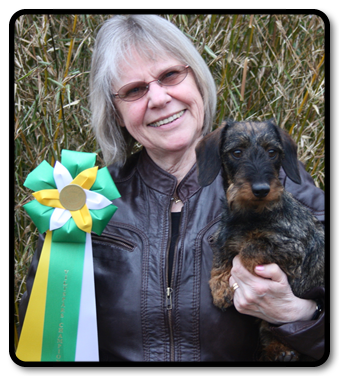 I applied for a kennel name and got approved in 1978, at that time exam was required at SKK in genetics etc. In the 70's I raised 28 litters, wire-haired all sizes, and long- and short-haired miniature dachshunds. I used breeding material from the kennels Björnslunds, Strops, Ormkärrs, Pågarnas and Kullabo and was a diligent exhibitor with good successes.

Social circumstances and a professional life as a sociologist / curator within social services, primary care and psychiatry, demanded more and more commitment. This meant that I wound up the kennel business during the early 80s. However, I was able to make contact with dachshunds not waive from and when Björnslunds Ilja died in 1991 I bought a long-haired miniature dachshund from Pågarnas kennel, Polly, which in 1997 got accompanied by Pågarnas Peggy and 1998 also by a golden retriever, Emma.

When Polly left us in 2005, we decided it was time for the mustache again and contacted Framnäsgården's kennel and on that road it is ... Now a bunch of wire-haired miniature and rabbit dachshunds rule at Engstorp ... / Eva